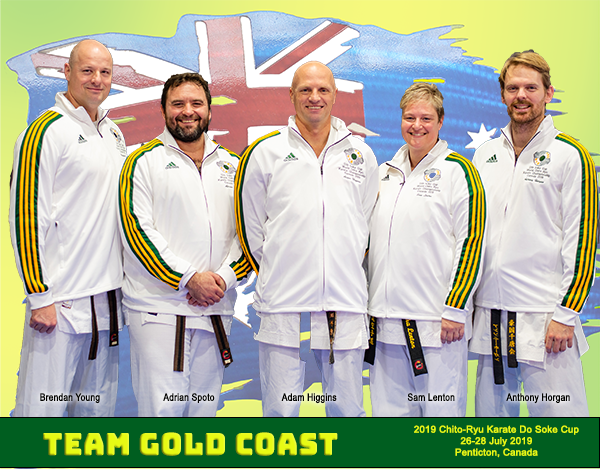 The Soke Cup is the world titles for Chito-Ryu Karate-Do and is only held every 3 years.  This event brings together the Chito-Ryu community from all over the world for training, competition, and building stronger relationships.

The Gold Coast dojo has always performed strongly at the Soke Cup providing proof of the excellent level and commitment of students we are lucky to have. This years team is made up of 5 experienced team members who are all in strong positions to take out a medal. Their training had been building since last year working on developing strength, fitness and skills through a series of Soke Cup Clinics, regular dojo training and weekly Wednesday morning fitness sessions.

Your team is now ready to do their best at the 2019 Soke Cup! 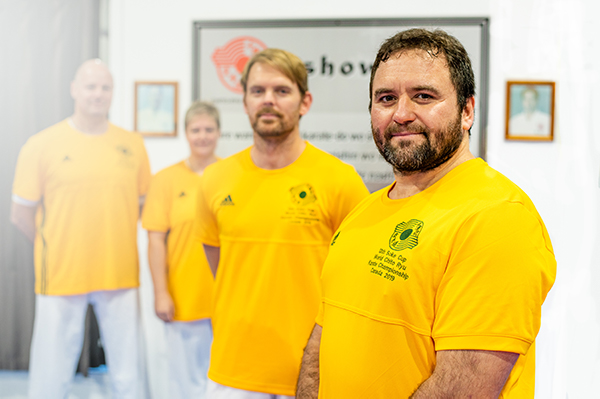 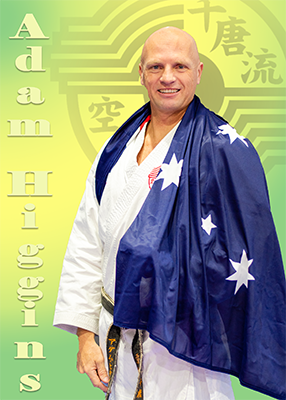 This will be Sensei Adam’s 7th Soke Cup, it will be over 20 years since his first Soke Cup in Toronto, Canada in 1998.  Sensei Adam has won kumite Gold at the 2013 Soke Cup in Hong Kong in the Black Belt Masters Division and will be looking to repeat this result.  Sensei Adam has also meddled as part of the Australian Men’s Kumite Team on a number of other occasions. In kata Sensei Adam’s best result to date has been a third at the 2017 Soke Cup in Kumamoto, Japan a result that he is keen to improve upon.

For Sensei Adam the best thing about the Soke Cup is:

“The great sense of camaraderie between all the different nationalities, the fierce competition and the opportunity to train alongside Chito-Ryu Karateka from all over the world”.

Sensei Anthony has shown his commitment to Gold Coast Chito-Ryu by regularly driving from Brisbane to attend classes and training sessions. He has represented the Gold Coast at 4 previous Soke Cups first competing at the 2007 Soke Cup in Bergen, Norway where he went on to win the novice men’s kumite and kata gold medals. In 2010 in Kumamoto, Japan he added another gold medal winning the men’s intermediate kumite and placing second in kata as well as being part of the Australian Team Kumite Team which came third. In 2013 Sensei Anthony moved up in to the Black Belt division coming a very credible 2nd in a very strong division, as well as making the finals in the kata division. A fantastic effort for his first time in the Black Belt division.  At the 2017 Soke Cup Sensei Anthony was a part of the Australian Men’s Team Kumite Team who won the silver medal, the equal best result ever for the Australian Team.

Sensei Anthony is obviously keen to get that Gold Medal for Australia as he is most looking forward to:

This will mark Senpai Sam’s third Soke Cup having first competed at the 2013 Hong Kong Soke Cup. Senpai Sam has competed strongly at previous Soke Cups, medaling, making finals and always giving her all. These results have come on the back of strong performances locally where she is always a strong competitor.  Senpai Sam has been working very hard in preparation for this Soke Cup.

For Senpai Sam she is looking forward to:

“Seeing the development and progression in people I’ve met and become friends with at previous Soke Cups. Also just the chance to perform what I’ve been working on for all these months. But, for me, the most important part of Soke Cup isn’t the event itself; it’s the preparation and training that we put into it, the teamwork, and the camaraderie. This year that has been especially true as I’ve worked with Brendan and Adrian as a team for team kata – that has been the best thing about Soke Cup already. Then cheering on my friends when we get there … fantastic”.

Brendan will be attending his second Soke Cup after a very successful first Soke Cup in 2010 at Kumamoto, Japan where he was awarded the Master Intermediate Tournament Champion award. A fantastic result for his first Soke Cup. Brendan was also part of the 2nd placed Australian Men’s Team Kumite team and will be keen for the team to once again make the finals for this prestigious event and challenge for the gold.

For Brendan the highlight for the Soke Cup has already occurred:

“What I am looking forward to has already happened…the way the team has grown closer and the development that each and every one of us has had together and individually… that is the big winner for me”.

Adrian is the sole rookie for the Gold Coast Team attending his first Soke Cup at Penticton. Adrian brings some strong kumite results with him to this event having won the last two Australian Men’s kumite titles and the last QLD State Kumite Title.  With a style well suited to the Soke Cup we are excited to see how Adrian performs.

For Adrian he is most looking forward to:

“Honestly, just to experience and compete in a Soke Cup! I know its broad, but the whole experience I am looking forward to as its my first competition at this level.”

As well as the Gold Coast Team Members Australia will be well represented with Competitors and referees from the Sunshine Coast, Blue Mountains and Tasseikan (Sydney) dojo in attendance.

Updates for how the team is going will be posted on our facebook page www.facebook.com/gckaratekobudo.

You can also check out a gallery from our team photo shoot on the facebook page (we may not be models but we had some fun!)

Note:  During the Soke Cup period we will be running a special reduced class schedule. A huge thank you to our senior students who have tried to cover as many classes as possible over this period.  You can download the schedule here => July 2019 Class Cover

This site uses Akismet to reduce spam. Learn how your comment data is processed.